A two hour long extravaganza. Extravaganza: It rhymes with Tony Danza so it must be good.

I reveal my intense hatred for smokers who give me second hand smoke: bring your kids!

I also discuss a little Hong Kong political controversy which honestly, is really no big deal.

Special: Who should be Major Matoko Kusanagi?

Alex has already written an excellent article on that over at ANIPAC, read it there!

However, it must be reiterated: the most important thing to consider in the casting:

I rest my case.

If Darker than Black is a hyper concentrated gallon of Red Bull, then Spice & Wolf II is a soothing cup of Chamomile tea or hot chocolate. Here's the thing, men do like romance when it is depicted as something genuine and organic. The improved graphics of the second season help seal the deal: The world is beautifully realized and utterly immersive.

In some ways, each town, its characters and challengers is akin to a thinking man's Shounen fighting arc.

An Anime Pacific episode that is actually focused on Anime?

Amongst the things we discuss:

* The poo-storm involved in the creation of episode 78 as well as episode 77.

* The first episode of the new season of "Darker than Black", will it be able to live up to its predecessor?

* Alex doesn't like those damn kids getting on his proverbial lawn. Here's a jolly fine article discussing exactly what Alex was ranting about. Read it here at thenullset.wordpress.com/

* Making a trailer before you actually make the movie, two great examples:

Now, I'm finally into fashion. Note, although this picture is meant to look "guerrilla", I have a sinking suspicion that this is a Japanese AV actress looking at her own videos. (Kind of a promotional shot)

We also discuss how the publishers of the English "Spice and Wolf" novels have de-manga-fied the book cover in order to widen their potential audience, despite the vast amount of cartoons attempting to copy the Manga/Anime style of drawing.

How do they do this, you may ask? By putting a naked character on the front. Now, no one is going to be embarrassed to buy it!

Alex has a similar problem with his beloved Gor novels.

In fact, almost every Gor result that turned up in Google images was somewhat embarrassing.

While we're at it, here's a webcam snap of my living room: 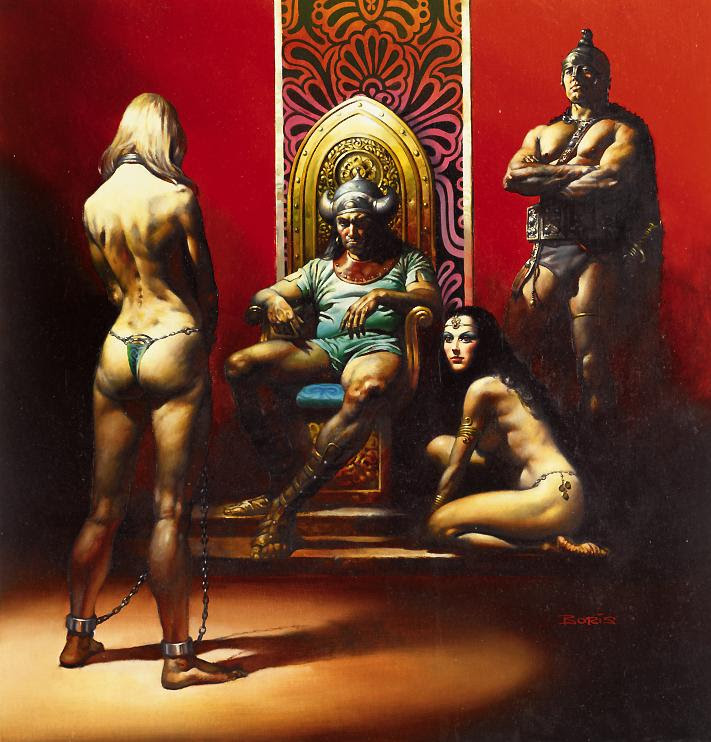 Yes, it's that bad that I actually completely forgot the name of the show, mistakingly calling it "The Last Order". This Russian-Studio 4oC co-production is terrible. Let me reiterate, terrible. In fact, my incoherent mini-review is the very definition of coherency when compared to this mess. Ok, in a nutshell:

To resurrect your fallen comrades, you need to wait for "A time of truth", which is essentially explained as, "A time where crazy shit happens"; more or less. Now, you might be asking, how to resurrect aforementioned comrades?

First, use an atmospheric diving suit to go to the other side.
Second, convince your reluctant friends to come back.
Third, go through the ghost train in your local afterlife carnival.
Fourth, buy some semi-automatic weapons from ghost salesman.
Fifth, you're resurrected. Completely corporeal and automatic weapons included!

Unfortunately, the Nazi's have discovered how to do this resurrection stuff too, and decide to resurrect some medieval Germanic Crusaders.

Note, despite studio 4oC's track record with fantastic animation, all the well animated parts are pretty much restricted to what is depicted in the trailer. The rest is nothing to write home about.

Giving up on the Star Crossed Anime Blog?

Dane and Alex (mostly Alex) complain about the Star Crossed Anime Blog (link). Having been the "go-to" place for us to know what to watch for the past couple years, we have now decided that we need to find something else.

Why? We don't have all the time in the world to watch Anime. We need a couple very solid recommendations for each season.

But at the Star Crossed Anime Blog, every show is good or excellent! Yet somehow the first season of Darker than Black (Alex's Favorite anime in years) gets ignored!

We talk about how watching a Star Crossed recommendation (which is everything, since everything seems to be good there) is very hit or miss.


Alex has been keeping an eye on Hanners' Anime Blog (link) to see if it gives any better advice.

Yet again, I review an anime which has offical huggable pillow releases.

Alex actually bailed when he discovered that Klan Klang, the buxom Zentradi pilot turns into a "Kawaii" little cutie when micronized.

Overall, it's Macross, love it or hate it. I for one, love Macross in all its shapes and forms. (Yes, even Macross 7) Unfortunately, Macross Frontier does suffer from an overly large cast which would have felt right at home in a 39 episode TV series, ala Macross * Macross 7. For a 26 episode series, some characters just don't get a change to develop. I do appreciate that Alto Saotome, the main character is depicted (at least aesthetically) in a deliberately effeminate fashion, yet has more cojones than most teenage mecha pilots depicted in Anime. Was this contrast deliberate?


This week, we return to something actually related to Anime as I actually review both seasons of The Tower of Druaga.

Alex pleasures himself, furiously, whilst praising the novel, Gardens of the Moon; So much so that I actually had to cut the bulk of what he had to say out of the actual review, as he kept interfering with my review so as to make "just one more" masturbatory comment about it.

What has saved studio Gonzo? Pandering to Moe of course! Here's a huggable pillow containing a character who is 10 years old; oh Gonzo!

Regardless, it is directed by Koichi Chigira, director of the rather fantastic, Brave Story and much of the same team. In short: Fantastic first season which manages to balance, humour (retro gamers will appreciate it), drama, action and emotion. The second season suffers to a certain extent as it eschews much of the humour that made the first season so delightful as well as changing the tower dungeon crawling setting, so associated with the retro dungeon crawlers, to a more metaphysical journey. But ultimately, gratifying as when taken as a whole.
Posted by Unknown at 8:17 PM

Perhaps it could be called the Anime Pacific Holiday special!

I tell you folks, this episode was cursed.

I'll keep the shownotes short, as I am not feeling too well today.

This episode we talk about:

And the delightful, Namco Namja Town!

Alex gets a male mail of a political nature and is utterly jubilant, resulting in an impassioned response.

Here's where me and Alex get political. This can often spell the death of a podcast!

We also discuss an utterly epic, hilarious e-mail from Regan!

We look at that "anime" stuff. I review the Tower of Druaga!
Posted by Unknown at 3:59 PM