Episode 111: Totally pooce and gas to the max 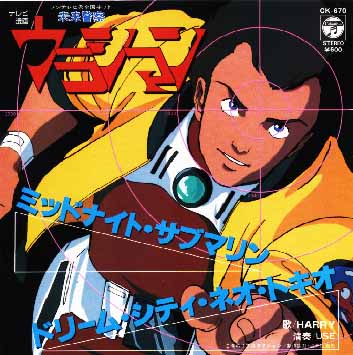 More "Inspector Gadget" than "Cyber City Oedo", Future Police Urashiman
is a great science fiction comedy and in many ways, encompassing all the attributes we miss in modern Anime.
Posted by Dane Scaysbrook at 10:37 PM

Anime Pacific 110: Birth of a Podcast

In this episode of Anime Pacific, Alex discusses some of the new Anime of the current season, Sex & Zen 3D, Chinese Medicine...AGAIN and I review the 1984 OVA, "Birth".

A storyline barely exists; and what little that does exist is relatively incoherent. The characterisation was cliché; even in 1984. Dialogue is sparse and there are MAJOR pacing problems.

Yet...despite these aforementioned flaws; Birth deserves its place in the Anime Hall of Fame: Not because of the veritable treasure trove of (now) famous names who worked on this: Joe Hisashi, Hideaki Anno and Yoshinori Kanada to name a few; but because of the absolutely amazing animation care of the late, great Yoshinori Kanada who would later key Animator in such small indie flicks as Akira, Castle in the Sky, Arcadia of my Youth and Kiki's Delivery Service just to name a fraction.

Posted by Dane Scaysbrook at 1:28 PM

Anime Pacific 109: Maoist of the Dead

This episode of Anime Pacific; We discuss Maoism, Marxism and post-earthquake stupidity displayed by an alarmingly large number of people, thus highlighting the lack of a solid science education. Alex also discusses everything wrong with High-School of the Dead.

Chernobyl happened; What did people overseas do? Nothing. A relatively minor nuclear reactor leaks; What happens? Panic, panic and more panic.

We also discuss, how amazingly orderly the Japanese are when faced with a catastrophe.

Alex also mentions the upcoming Wonder Woman TV series and the recent redesign of the suit, which makes her look like some sort of Superhero member of the Royal Canadian Mounted Police. Again, this is due to the scourge of modern media: The Compromise, or the "StarBucksinization" of the media. It's not enough to strongly appeal to one group; It must appeal to as many people as possible resulting in something that is utterly bland.

High School of the Dead is a good example of this aforementioned compromise.

Posted by Dane Scaysbrook at 1:08 PM